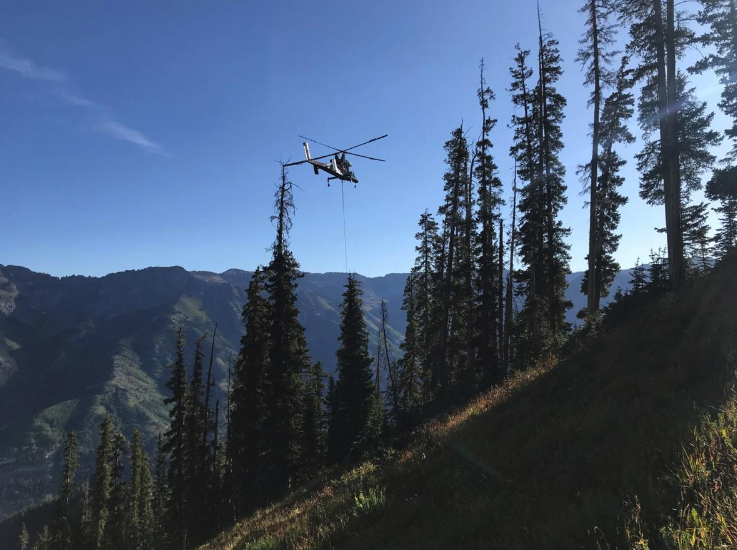 Zip Line, Logging and One Burley Chopper- Telski Readies for Winter, Next Summer

As summer dwindles and crisp nights hint at fall, the Telski is readying for the winter. A heavy-lift helicopter is laboring through most of September, as the resort executes a selective logging operation on the mountain that will improve forest health, mitigate wildfire fuel and make for some impressive tree skiing.

But next summer is also on Telski officials’ minds. The infrastructure for a new zip line is nearing completion, and the latest on-mountain feature will be open for next summer’s thrill-seekers, according to Scott Pittenger, the resort’s director of mountain operations.

The total zip line distance is more than 1,500 feet, and at its highest point, dangles the daring 300 feet in the air.

Zip lines haven’t always been used for recreational purposes. Smaller, less thrilling versions that don’t require braking can be found on kids’ playgrounds, but they are often used for more practical purposes such as ferrying supplies across valleys and river chasms, particularly in mountainous countries. Sometimes called aerial bridges, zip lines are used for canopy tours of forested areas using lines between platforms built in trees. The world's longest zip line is the Jebel Jais Flight from one of the peaks of the Jebel Jais Mountain in Ras Al Khaimah, United Arab Emirates, with a single unbroken span of 9,290 feet, 11 inches.

Telluride’s new zip line will afford riders with great views as they soar over the ski area.

“This will be a fun, interactive experience,” Pittenger said. “I’m looking forward to it.”

Looking forward to winter, the ongoing whir of helicopter blades will last until nearly the end of the month. By removing dead or diseased trees from the Chair 9 area, forest health will be improved, Pittenger explained. Spruce budworm has been a scourge of forests throughout Colorado. By removing trees weakened by parasitic activity, more sunlight can reach the forest floor and give younger trees a shot at maturity.

“The spruce bud worm has laid waste to lot of our fir trees,” Pittenger said. He added that the Douglas fir and Englemann spruce trees are hardier species. With the selective logging project, those species will have more room to grow and thrive.

“They seem to withstand some of our diseases and parasites,” he said.

During logging operation hours, trails will be shut down that are under the flight path in an effort to protect the public from potential injury.

“We’re keen on keeping people safe under the flight path,” Pittenger said of the closures. The project’s hours of operation are Monday-Saturday from 6:30 a.m. to 6 p.m. Signage is placed at the trailhead for Bear Creek Trail and in other affected areas.

The resort’s steep terrain presents challenges; challenges that can be addressed through the use of helicopters specifically designed for this kind of heavy lifting and precision placement of the damaged timber.

Mountain Blade Runners is based in Montrose. From their fleet, the company is using a K-MAX 1200 aerial truck helicopter. According to Mountain Blade’s website, the chopper is used for “repetitive external lifting operations, including fighting wildfires, search and rescue, disaster relief, logging, and ski lift placement. It is built to withstand harsh conditions, maintaining power and performance at high altitudes.”

The logging operation, which is a project with the National Forest Service, removes diseased and dead trees from the Chair 9 area and takes them to one of two other areas; either to the bottom of 9, where the logs will be burned; or to an area near Chair 10, where merchantable timber will be processed and taken to a mill, as reported in an Aug. 25 Daily Planet story.

“This process is leaving our woods in a very healthy condition and will make for some incredible tree skiing this winter,” Pittenger said.